My blogging prowess 😆 has caught the attention of this kind-hearted gentleman and just couldn’t leave my site without commenting on my not-so-interesting post.  Probably because according to him, he also used to be as crazy as I am changing wordpress themes from time to time.  In other words, he has found his crazy WP-theme-mate in the blogosphere.  I am taking revenge for his sweet act of featuring my addiction to wordpress on his blog.  Well, revenge with charms 😳 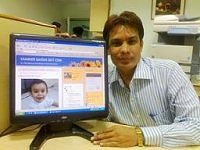 Shanker Bakshi is his name. A native from India, where tandoori is at it’s best. Shanker has worked as a cartoonist, a radio jockey, television anchor, and as voice over artist and just recently, he embarked into novel writing. He wrote a short story “Broken Wings” and to be convinced that he is a scribe, he gave a copy of the story to some of his friends to read and evaluate. He thought his story was not good enough to be published, but to his delight, his critic-friend Rohit Pathak remarked, “You can not understand how difficult it is for a hard core critic to appreciate something rather than doing the postmortem of the creation…. in simple words… Shanker! It is remarkable! Selection of the personality, presentation of his works, the emotional touch. And of course the way you presented was very very impressive. Keep it up!” These words of appreciation proves that he is a newly-born scribe. Now awaits the publishing of his short story and surely, the people of India will have another story-writer in it’s history.

His entry into the blogosphere was an inspiration from a blogger named John Chow and he considers him as his dot com idol even trying to imitate him…..with LOL here. Who’s John Chow, by the way? Take this as an assignment. Shanker had his blog on google blogger but later on installed WordPress in his own domain. And so the craziness begins in changing themes from time to time. Prove to this, he had a theme last week which I missed to print. This week is another theme.

When I think of India, I remember the witty-pretty-lady Sushmita Sen who won the Miss Universe Title held in the Philippines in 1994. When I met the name Bakshi, I remember Hrundi Bakshi played by Peter Sellers in the comedy film, The Party. A scene from the film showed Peter Sellers trying to meddle a fight between a girl and her boyfriend. The boyfriend then asked Peter Sellers, “Who do you think you are?” And Peter Sellers replied, ” In India we don’t think who we are, we know who we are.” Kidding aside, this is what exactly Shanker Bakshi is, that he knows who he is – the rambling Dot Com Guru.  Wish you all the best, Shanker!

9 Replies to “My Revenge To The DotCom Guru”