The first week of work is finally over after commencing it with competency enhancement seminar, fixing schedules and meeting with school rectors.  The final day which was last Friday was a social trip to Känsö and Vargö islands.  It was my first time to be on those islands.  We were on board the boat from Stenpiren in Gothenburg at 9:00am and we had breakfast on board.  We were about a hundred persons on the boat so it felt a little bit tight.  Although it seemed to rain in the morning, the weather became bright and sunny when we arrived at Känsö island.  We had a guide telling us the history of the island and it’s unique flora.  It was a long walk especially when we went up the tower overlooking parts of Gothenburg.  I couldn’t believe I managed to go up there, hahaa!  But going down was a little harder than going up though.  Then we took on board again to move to another island called Vargö to have our lunch there.  We headed back to the city from Vargö at 3:00pm.

I’m on a high mountain where the tower is

Going on board to proceed to Vargö island 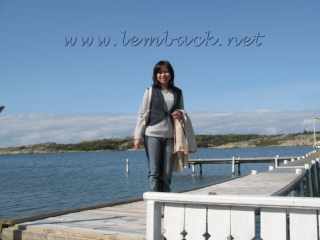 At Vargö island, after the exotic lunch